This sounded amazing. We couldn’t wait to join. Companion animal lovers shelled out their money in enthusiastic support. Tshirts, hoodies and kit was ordered and publicity material was downloaded from the ‘Notodogmeat’ website. Supporters cheerfully paid for the cost of printing, laminating etc. and travelling to protest and raise money. Wow they, these illustrious leaders, actually had their feet in the UK House of Commons. They were endorsed by the ‘International Coalition Against the Cat and Dog Meat Trade’, none of us knew who this important organisation was but it certainly read well. They even had their own, ‘pro bono’ lawyer ( or did they say lawyers)  running the show? It was a bit confusing, but never mind, we were later told that they were taking their movie made by a, ‘leading investigative journalist’ to Cannes  on 18th May 2013. Now that was exciting. We imagined celebs & movie stars coming out in support when viewing this movie accepted at the Cannes film festival,. We were told that ‘Notodogmeat’ was founded by a Julia de Cadenet and Michele Brown (the ‘leading investigative journalist’). 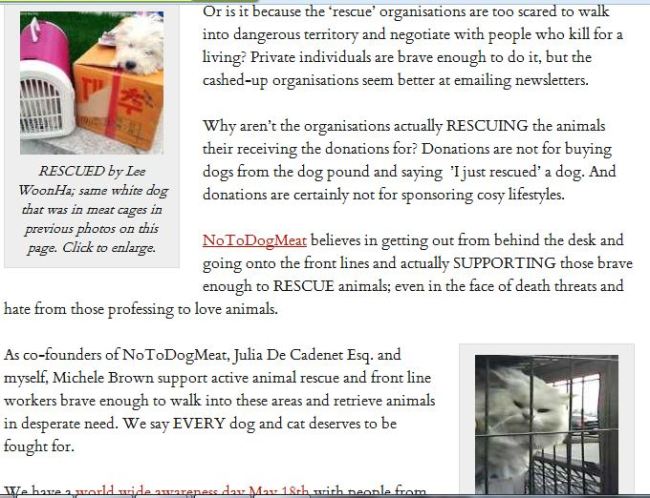 It was very disquieting to find the above information on Google about Julia de Cadenet! We began to wonder if a person who allegedly attempted to steal an intellectual property could be trusted with donors hard earned cash. Ms de Cadenet, we discovered, was not only the co- founder of, ‘Notodogmeat’  she was also their much quoted, ‘award winning pro bono lawyer’.

Even more intriguing was that Ms de Cadenet  describes herself as a Barrister. Very difficult to believe that a Barrister would risk their professional status by trying to steal an intellectual property? There it is though.. the accusation is still on the web, with no injunction apparently served to remove the extremely damaging accusation. Mentions of Julia as a Barrister have for the most part recently disappeared.  Although she describes herself as such on the UK petition she created.

Strangely when registering, at approximately the same time, as director of, ‘The World Protection For Dogs And Cats In The Meat Trade’ Julia changes not only her profession (& alters her name) but also her birth-date by many years. Will the real Julia de Cadenet please stand up. By the way, the address shown on both these screen shots are of a virtual office and NOT of her private address or place of work.

Attempted plagiarism, lying on an official government document, the plot thickened. As the figurehead of, ‘Notodogmeat’ this person was gathering more and more FB supporters willing and eager to supply her with money. Misleading posts went up on the official FB page, only to be quickly removed when queried too closely. It became clear that, ‘Notodogmeat’ had more than Ms Brown & Ms de Cadenet as co-founders. Mr David Merrill is a fellow officer in the UK registered company, ‘The World Protection For Dogs And Cats In The Meat Trade’, the so called ‘umbrella’ for Notodogmeat. We breach no privacy in stating that since that information is freely available on the site http://www.companiesintheuk.co.uk . Mr John Hughes is their self-acknowledged Campaign Manager, and has been so since ‘Notodogmeat’ hit the ground running in March 2013. The much earlier quoted, ‘International Coalition Against the Cat and Dog Meat Trade’ never did exist.

The above information, as it emerged, became very interesting to a number of us. What really alarmed us was when we began to see snide, disparaging remarks made by, ‘Notodogmeat’ leaders and their acolytes. These remarks were directed at discrediting, Soi Dog Foundation, Animals Asia, HSI and the FaceBook Page, ‘Hand in Hand with Asia’s Animal Activists’; AND by inference any other organisation fighting against dogs & cats for human consumption! Soi Dog Foundation seems to be a pet hate of theirs. This is one of them with a fake FB account pretending to be John Dalley of Soi Dog! 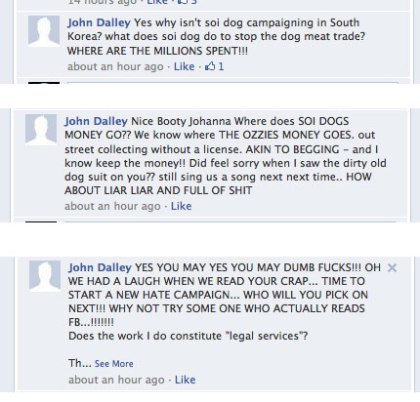 The numbers grew of people recognising that something was very wrong with this animal ‘charity’. Credible animal charities distanced themselves and groups of FB members began to investigate further. Donors began to complain that they had been ignored when requesting receipts. Supporters reported that ‘Notodogmeat’ were indifferent to the hard copy petitions they had so tirelessly collected. Questions were raised about their true charitable status and about where donations were going. That is when the, ‘dirty tricks against critics’ campaign started.

Shockingly two notorious, ‘bad lads’ (and their faithful acolytes) of FB animal charity scams, crawled out of their troll caverns to attack the critics of, ‘Notodogmeat’. Were they always part of, ‘Notodogmeat’? Is  ‘Notodogmeat’ in fact one of their many scams? If not, why on earth would they bother to attack so viciously on behalf of an organisation in which they have no financial interest?

In Chapter 2 we will report further on concerns about ‘Notodogmeat’.

3 thoughts on “All Singing All Dancing Animal Charity Scam? Chapter 1”